Suilven - in a blaze of glory 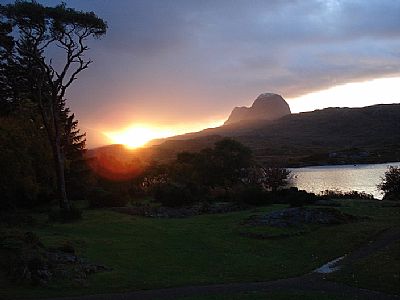 Suilven is a seriously special mountain, without doubt my favourite. For the next few months I'm part of a team of people who will be blogging about all aspects of the hill, while two stretches of the path up the mountain are upgraded. You can read my first post here. There will be more.

The project is part of the Coigach-Assynt Living Landscape Partnership, which has raised more than three million pounds to do various landscape-related projects in the area. The work on Suilven will help to mend some of the damage to the path, with one team working high up on the top and another on the low-lying approach.

As if the billion-year old beauty wasn't interesting enough already, for the past few days it has been ablaze. A series of fires have been smouldering or roaring around its lower slopes and even right up onto the heights. We don't know exactly how the fires started, perhaps someone fishing didn't quite put their barbecue out completely. It looks like more than 3000 hectares of land has burned - around 12 square miles. 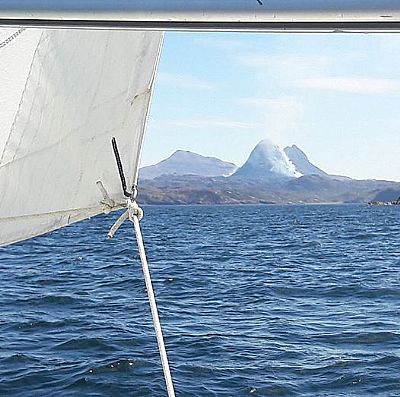 I'd been away on the boat (to Gairloch, to teach my last University class, as you do), and we sailed into Lochinver to the amazing sight of smoke pouring off the southern side of the hill. It loves playing with clouds, that mountain, and perhaps after a week of completely cloudless weather it needed something to wrap around itself. Or maybe it just wanted to pretend to be a volcano.

After three days, and considerable fire-fighting effort, thanks to Assynt Foundation's staff, particularly John Venters and Stuart Belshaw and to the fire brigade, the fire is now out. There have been wildlife losses, including a buzzard's nest, and damage to the new native woodland plantation that we hadn't quite finished establishing. But there was no loss of human life, or damage to houses, and the vegetation will recover eventually.

The mountain itself has no doubt seen worse, and will again.