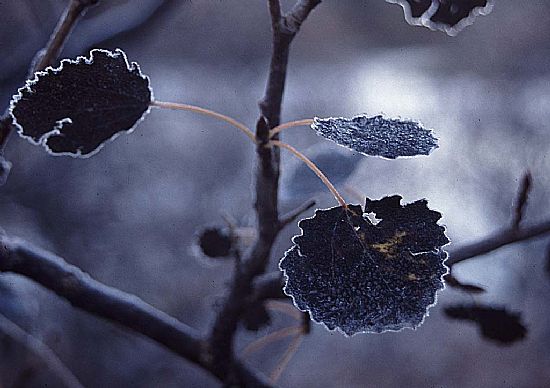 The penultimate letter in the Gaelic tree alphabet is aspen representing E, for eadha (in old Gaelic), critheann in modern Gaelic. This graceful tree grows in sometimes huge stands and has grey bark, pitted with diamonds. Its unmistakeable round, fluttering leaves have led to many stories and its folklore associations are as strange and various as its ecology is fascinating.

one gold
aspen coin
woodland currency
for a priceless
moment

Aspen is the 17th, and penultimate, letter in the Gaelic tree alphabet. It's E - old Gaelic eadha, modern Gaelic crithean.

Aspen is called Populus tremula in latin, appropriately, as its leaves tremble in the slightest breeze.

Aspen is called old wives’ tongues in Roxburghshire, because the leaves are constantly moving.

Aspen suckers readily, forming stands of a single organism. Individual trees are short lived but stands can be ancient.

The largest organism on the planet is an aspen grove, nicknamed Pando, in Utah, USA. It covers 106 acres and weighs 6000 tonnes.

The male and female flowers of aspen are on separate trees.

Aspen seeds are tiny on silver hairs – fluff – blown by the wind.

Aspen leaves move so much because of their flattened stems.

Aspen suckers are food for rabbits and deer. If aspen suckers get too vigorous and compete with the trees, they are suppressed naturally.

Aspen comes into leaf extremely late because it is prone to embolisms if it gets caught by a late frost after its sap has started running. This is because its vessels are less narrow than other trees.

Wood ants tend aphids that suck the sap of aspens.

One to mull over... Paul Celan's poem Aspen Tree http://www.artofeurope.com/celan/cel1.htm

Aspen wood cuts well with a chisel, but it rots so must be kept dry.

A poultice of aspen root heals cuts and bruises.

Edward Thomas wrote one of the best aspen poems. http://www.poemhunter.com/poem/aspens/

Aspen has the most acute hearing of all trees – and trembles with all that it hears.

Aspen is sacred because the wind, to which it is most sensitive, is the messenger from the gods.

Aspen is a shield tree to overcome fear.

Carry an aspen twig to protect against theft.

Aspen is linked to Cronos, Greek god of time.

To be eloquent, sleep with an aspen leaf under your tongue.

Norse Odin stabbed himself and hung himself from an aspen for 9 days – sacrificing his body to achieve spiritual rebirth.

Christ was reputed to have been crucified on aspen, so it trembles in shame.

It is a Highland tradition to ‘dress down’ (i.e. tell off) an aspen on Good Friday.

Crowns of aspens were found in graves in Mesopotamia, 3000 B.C.

There is a taboo against using aspen for any farming or fishing implements.

There used to be an ancient Celtic cult of Esus, a god who was appeased by hanging people in aspen trees.

It is taboo to cook on aspen wood.

A fe is an aspen rod for measuring the dead for coffins.

A spell against ague: ‘Aspen tree, aspen tree, prithee shake and shiver instead of me’.

Finally, with strokes of havoc, I'll leave you with Binsey Poplars, felled in 1879, by Gerard Manley Hopkins. http://www.poemhunter.com/poem/binsey-poplars/

The next and final letter in the tree alphabet is yew.