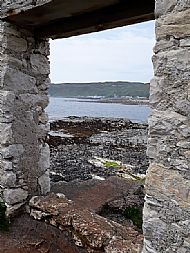 Wally the wandering walrus has been wending his way back north after my book launch and celebrations. Meanwhile, I have been trickling southwards in our sailing boat, called Each Mara, which is Gaelic for walrus. We have finally washed up on the shores of Rathlin Island, just off the coast of Northern Ireland, which feels thoroughly exotic.

We made it here for the very end of their maritime festival, and were beguiled by the wonderful curragh of Row the Erne. Having rowed over from the mainland, these intrepid women mariners turned their craft into a cinema for the night last night. Built of only wood and tar-painted canvas, it's similar in construction to what Pytheas would have found himself sailing in back in the Iron Age. See their facebook page and be inspired - it's not just the rowing, it's the community involvement in the whole process that makes it such a fascinating story.

Rathlin is full of interesting surprises, like the stone writing seat looking out to sea, with words carved into it that were written specially by Seamus Heaney. I discovered that here Robert the Bruce hid in the cave and met the famous spider who inspired him not to give up, but to head back to Scotland and his glorious future.

In that spirit, weather permitting, we shall soon turn and head north again, back to Scottish waters. But I write this to the sound of fog horns booming and wailing, so who knows what tomorrow will bring. I wouldn't be sorry to be marooned here among the thrift and trefoil a little while longer.