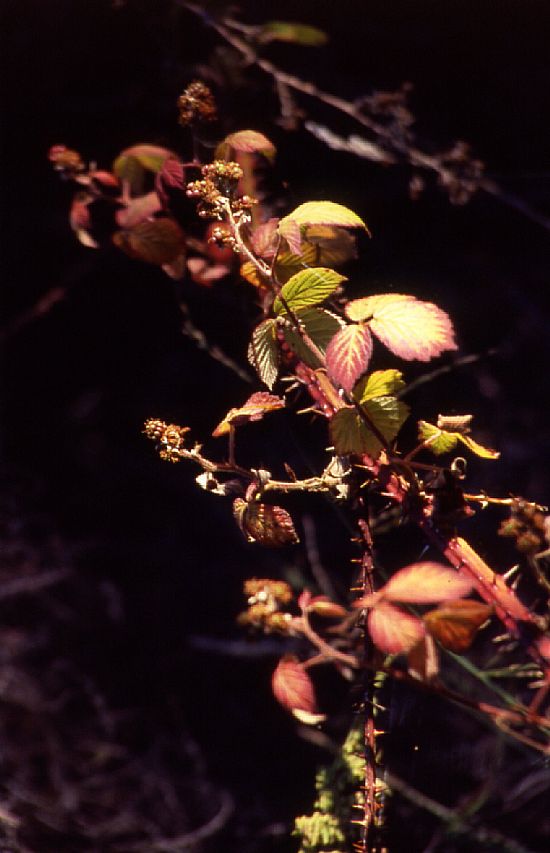 Bramble is the tenth letter of the Gaelic tree alphabet, representing M - in old Gaelic it was Muin and in modern Gaelic it is Dreas. Muin also translates as 'vine', and so it appears in many versions of the alphabet, but as grape vines have never grown wild in Scotland, as muin is one of the old Gaelic words for bramble and as brambles make excellent wine, we deduce this is what was really intended!

The tenth letter of the Gaelic tree alphabet is M. This one's controversial – often taken as vine, but it's not native, or honeysuckle, from which you can't make wine, so we say it's bramble.

Bramble in old Gaelic is muin (vine), in modern Gaelic dreas or dris (entangler, prickle). In latin it's Rubus fruticosus.

Another bramble poem, this time Seamus Heaney at his best - Blackberry picking: https://www.poemhunter.com/poem/blackberry-picking-3/

The best bramble berries are the first to ripen at the end of the spears.

Brambles are apomictic – they can produce seeds without being fertilised.

240 species of insects feed on bramble, 32 of them exclusively on bramble.

Song thrushes and wrens like to nest in bramble thickets.

Bramble is good in hedges.

There’s a wonderful poem, ‘Shrubbery’ by Jo Shapcott, about rummaging around for brambles. It used to be available on the Poetry London site but seems to have been taken down. It’s in her collection, Of Mutability.

In some parts of Scotland there are taboos about picking wild hedgerow brambles.

Michaelmas day is the traditional end of the bramble harvest.

In Drumfries, after Rood Fair (last Wednesday in September) the evil one puts his clubfoot on the brambles, rendering them useless for eating.

That was a bramble riddle from Glencairn.

Bramble dyes a lovely purple, but fades to puce.

Bramble roots were used against bronchitis and asthma.

A wreath of bramble protects against evil (but isn’t very comfortable...)

Bramble is a symbol for learning from others.

A traditional tobacco pipe was carved from bramble wood.

At the spring festival, a corn dolly representing Brigid carries a bramble wand.

Bramble stems are used for binding straw and rush baskets and skeps, especially where trees are rare (e.g. Shetland).

Jesus used a bramble switch riding his donkey into Jerusalem and driving the money lenders out of the temple.

After you've picked them, it's time for Galway Kinnell's Blackberry Eating: http://www.poemhunter.com/poem/blackberry-eating/ Lick your lips!

And finally, lowering the tone somewhat, here’s my bramble squib.

roots say shut up and hide

pips say spit us out

barbs say give us blood

but I say bramble

The next tree in the alphabet is ivy.