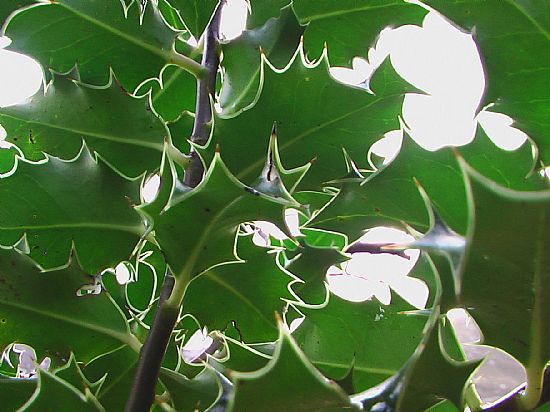 The eighth letter of the Gaelic tree alphabet is holly. It represents T as holly was Tinne in old Gaelic. It's modern Gaelic name is is cuileann.

Holly is an unmistakeable tree, the most substantial evergreen broadleaf and a symbol of strength and protection through the winter. In folklore Holly was Lord of the Woods through the months when light is waning, and was the rival of Oak for the favours of the Lady of the Woods, Birch, who switched her allegiance from oak to holly at midsummer every year, then back again at the winter solstice.

Today's tree is the eighth letter of the Gaelic tree alphabet: holly - for T- tinne in old Gaelic, cuileann in modern Gaelic.

The Gaelic name cuileann has its root in 'cul' to guard or defend.

Holly trees are either male or female, and both are needed for fertile berries.

Holly makes good hedges – the more you cut it the pricklier it gets (a response to browsing animals).

There's a nice poem, called 'Good Hedges', with a holly inflection, by Jamie Mckendrick, but I can no longer seem to find a live link to it.

Holly takes its time. If it crops well one year, it’ll rest the next. Its seeds take two years to sprout.

A tea of holly leaves was used as medicine for measles – it causes sweating and purges the system. It is poisonous.

A hot compress of holly leaves helps to ease the pain of broken bones.

Holly shoots are ideal whip shafts and holly coppices were grown and maintained for this when horse transport was common.

Holly is supposed to protect against lightning if planted near a house.

Holly and Oak are rivals for the favours of the Lady of the Woods (birch).

Holly King rules while the light is waning (from summer to winter solstice). Then Oak King takes over.

Holly is a symbol of protection in dark times.
Holly helps a person find balance if they have moodswings and brings good cheer in depression.

Holly is a guardian of life in the midst of death – a reminder that life goes on.

At midwinter, decorate the house with holly and ivy to scare off evil spirits and unwanted intruders.

Many people put a sprig of holly on their Christmas pudding and set it on fire, a remnant of a much more ancient pagan tradition.

Old hogmanay rite – boys would strike each other with holly believing they would live a year for each drop of blood shed.

Holly is a symbol of immortality, and regeneration. It watches over the harvest, when the corn-god dies and is reborn as seed.

It is bad luck to fell a holly tree without due ceremony.

Men with a holly leaf in their pocket are irresistible to women! A berry works too, apparently.

To know your future wife/husband, pick 9 leaves on a Friday night, tie in a hankie with 9 knots, stay silent until you dream about them.

Fairies like holly and are happy if you bring it inside in winter, but only until end of January.

If you keep holly inside after Imbolc (1 Feb) the goblins will come and get you.

I'll leave you with Emily Bronte's poem, Love and Friendship, because friendship is like the holly tree. http://www.famouspoetsandpoems.com/poets/emily_bronte/poems/4180

The next tree in the alphabet is hazel.