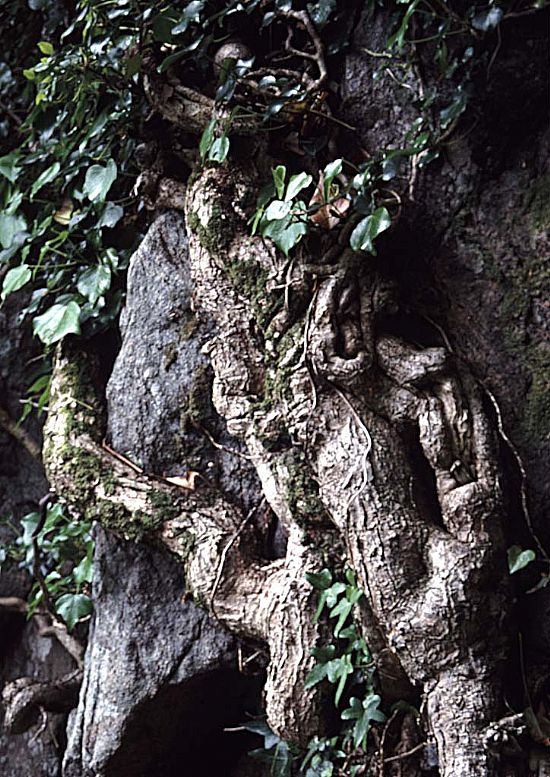 Ivy is the 11th letter in the Gaelic tree alphabet, standing for G as the old Gaelic name is Gort (literally bitter, which the berries are). As a tree it can't stand on its own, and uses the support of others. Much of its symbolism comes from this. It has a wide range of medicinal uses.

The 11th letter of the Gaelic tree alphabet is ivy, standing for G, as its old Gaelic name is Gort.

Ivy's ancient name Gort means sour, as the berries are. The entire plant is poisonous.

Ivy is perhaps not the best model for romance, in The Ivy Wife, Thomas Hardy's poem. http://www.poetry-archive.com/h/the_ivy_wife.html

Ivy flowers are the latest of the year, and therefore important for bees.

In Fife an infusion of ivy leaves was used as an eye wash, especially by miners.

Ivy leaves boiled in butter makes an ointment for wounds and a poultice cures corns.

Wear a cap of stitched-together ivy leaves to cure excema.

Ivy berries produce a pink/purple dye and need no mordent.

Ivy is good for making baskets.

Ivy is the clan badge of the Gordons.

When evergreen ivy grows up trees it increases their 'sail' (or wind-resistant surface) in winter, thus increasing likelihood of wind-throw.

Ivy has the power to bring down an oak. It symbolises determination.

Ivy is an important winter haven for small mammals and nesting site for birds.

Ivy is a symbol of romantic desolation.

Architects of the Victorian Gothic revival used ivy as a symbol of melancholy and romantic ruin.

White ivy leaves were sacred to Greek goddess Ariadne, in whose honour male human sacrifice was made.

Ivy was sacred to Orisis, Egyptian god of magic.

The Bacchae drank ivy, fly agaric and pine-sap wine and went beserk to celebrate the festival of Bacchus.

A wreath of ivy protects milk and dairy products from bad spirits.

Pin three leaves of ivy on your nightie to dream of your future husband.

‘Ivy, ivy, I love you. /In my bosom I put you./ The first young man who speaks to me, /my future husband he will be.’

Bringing ivy leaves inside will bring good luck at midwinter.

Ivy's spiralling motion echoes the movement of the moon and stars.

Ivy is interchangeable with honeysuckle in many legends – both are wanderers.

Ivy girl and holly boy would parade at Yule dressed in leaves, singing satirical songs, taking the evergreen through the dark times.

The last wheatsheaf of the harvest is bound with ivy and called ‘The Ivy Girl’. Embarrassing if she's on your field.

Ivy in your dreams means stop and reflect on your direction.

A wreath of ivy, honeysuckle and rowan hung over the lintel protects from witchcraft or the evil eye.

Ivy snuff is a hangover cure.

Finishing off with another Victorian novelist who wrote an ivy poem, Charles Dickens. http://www.poetry-archive.com/d/the_ivy_green.html

The next tree in the alphabet is blackthorn.