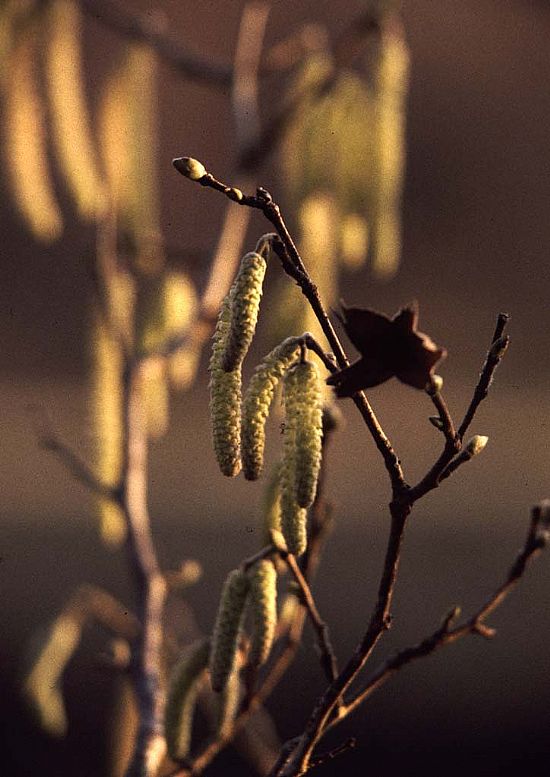 Hazel is the ninth letter of the Gaelic tree alphabet, representing the letter C - in old Gaelic it was Coll and in modern Gaelic Calltainn.

Hazels form multi-stemmed trees, and if coppiced regularly look like a bundle of sticks. Left to their own devices they form magnificent, sprawling trees. They produce nuts, important for people and animals and in folklore they represent wisdom.

My Mum was called Hazel.

There are 12 species of hazel around the northern hemisphere.

Hazel is closely related to the birch tree – both are in the family ‘betulaceae’.

Honeysuckle loves hazel and primroses grow well under them.

Hazel flowers in January or February, earlier than any other tree.

Hazel catkins are sometimes called lambs tails. These are the male flowers.

Hazel’s female flowers, which will grow into nuts if pollinated (by the wind), have red styles, like tiny brushes or tassels.

Hazels leaves are on the trees for more months than most other native trees.

Squirrels, mice and voles eat hazel nuts, and store them for winter, often forgetting where they stash them, which is good news for the hazel.

Woodpeckers love hazel nuts. Both woodpeckers and hazel are much less abundant now than in the past.

Bears used to live in Scotland, and hazels nuts were an important food for them to fatten up on for winter.
Hazel is important for lungwort lichens. Graphis alboscripta is a lichen that grows only in Scotland, on hazel.

Lactarius pyrogalus, the hazel milk cap, is a fungus that grows only with hazel.

5 species of moths live only on hazels.

Hazel trees live longer if they are coppiced. To coppice a hazel, cut its stems down to a few centimetres. The ‘stool’ will resprout and grow new poles.

A new hazel will grow by ‘laying’ a stem down from a tree.

To rive = to split a hazel pole long-ways. Ethers = hazel sticks used as binders for the top of hedges.

Otzi the Iceman’s backpack and arrow quiver were partly hazel.

The earliest people in Scotland ate a lot of hazel nuts. In Oronsay, the roasted shells of 300,000 hazel nuts were found in a pit.

Hazel nuts are full of protein and oil, and ground up make flour for biscuits. Bread made with hazelnut flour is good for long journeys.

Ground nuts in honey is good for a cough.

Woven hazel is called wattle. In the past, most people here lived in wattle-and-daub houses.

Hazel is used for spares and staples for thatching roofs with heather.

You should never cut hazel on a waning moon – the sap runs down and the wood is brittle.

Hazel is used for baskets and creels, coracle frames and ship fenders.

Use hazel for a talking stick (or is that a typo?!)

Hazel can be used for a caman (shinty stick) and a lump of boiled hazel root was used as a shinty ball.

Barrel hoops were made of hazel.

A hazel fork is the best weapon to use against a poisonous snake.

Hazel is used for ‘dowsing’ for water, or minerals – cut a fork where the sun has shone through from east and west.

Hazel is the tree of wisdom, science and poetry – hazel nuts will make you wise and help you overcome a creative block.

‘In a nutshell’ means the kernel of truth.

The salmon is supposed to have learned to migrate after eating hazel nuts.

A baby that drinks hazel nut milk before its mother’s will have the power of prophesy.

Finn MacColl became wise by licking his finger that touched the salmon that ate the nuts of the nine hazels of knowledge over the magic pool.

Fearchar the drover ate broth made from a snake that lived in a hazel in Glen Gollaidh, and he instantly became a wise doctor.

Hazel is a symbol of satirical verse.

Here's an extraordinary poem, To a hazel tree, by Czeslaw Milosz. http://poetshouse.blogspot.com/2006/04/to-hazel-tree.html

Sea captains wear a hazel twig in their hat to keep safe from storms.

At Midsummer, cattle were driven through fire with a hazel stick, for luck.

A gift of a hazel twig tells a suitor, ‘be wise and desist’.

Burn hazel on the evening before a wedding for happiness.

To find out if a romance will work out, put a hazel nut in a fire and say, ‘If you love me, pop and fly. If not, lie and die’.

To predict the outcome of a love affair, put 2 hazel nuts (1 each) in a fire and see how they behave – quiet burning means a good marriage.

Burn hazel at a funeral for wisdom in the next life.

A hazel cross will cure an adder bite.

A hat made with hazel sticks will grant the wishes of its wearer.

Sleeping with a hazel nut under your pillow helps your dream to become reality.

To see the fairies, drink tea made of hazel shoots, marigold, rose and hollyhock flowers, and thyme...

… and then you'll be able to see that the Queen of Fairies’ chariot is a hazel nut.

The next tree in the alphabet is bramble.