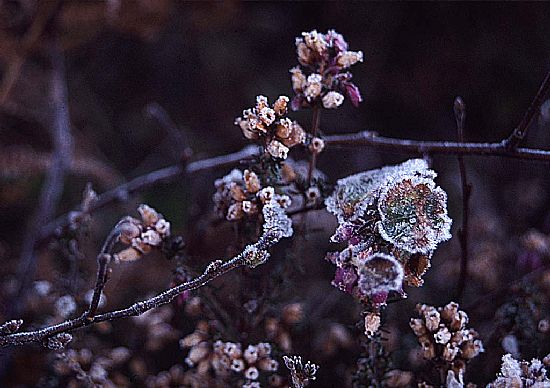 Heather is the 16th letter of the Gaelic tree alphabet, the third vowel, U, as it was ur in old Gaelic. It is Fraoch in modern Gaelic, and there are three species in Scotland. You can do with heather pretty much everything that we tend to do with plastics these days, plus it smells gorgeous, provides bees with their most delicious honey and can be used to make fantastic beer. This generosity is the basis of the folklore surrounding this most widespread shrub, an icon of Scottish moorland and woodland understory.

Here's a poem I wrote after spending an afternoon in the woods with the children from Lochinver and Stoer primary schools.

Heather is the 16th letter of the Gaelic tree alphabet. U, ur in old Gaelic, Fraoch in modern Gaelic.

There are three species of heather in Scotland.

Underground, heather roots, like those of many plants, depend upon a relationship with a microscopic fungus: rhizoscyphus ericae.

Bees love heather and it's a very important late season crop for stocking up  for winter.

The Scottish wild cat is sometimes called the Heather Cat.

A heather tree can live up to 30 years.

One of rural Scotland's greatest controversies is muir-burning, torching heather in spring for pasture or grouse.

'Of all Scottish wild plants the prize usefulness must surely go to heather'. Tess Darwin.

Heather flowers have been used since ancient times in place of hops for making beer.

The heather house:  it is used for thatching roofs, for wall insulation and flooring mats, and even  to sweep the chimney!

Heather bunches, flowers up, stuffed into a bed frame, makes a bed that 'may vie in softness with the finest down’.

A heather pillow helps you sleep.

According to Taliesin, heather 'gives consolation to the toil-spent folk.'

Stuff your jacket with heather – it's a bit prickly, but it'll keep you warm!

Heather is used as bedding for sheep and cattle.

Heather can be woven into fences, and combined with fleece, makes a good wet-ground path surface.

Heather - strain your tatties with it.

Heather was used for tanning leather.

A formerly important Highland industry was burning heather with kelp to produce potassium chloride and sulphate.

If sheep eat too much heather they get heather-blindness.

Heather-tip tea was a favourite of Robbie Burns.Heather represents generosity of spirit and great passion.

The scent of heather eases period pains and migraines.

I can't find Ted Hughes' Heather poem on the web, but it's worth reading!

Queen Victoria made white heather famous when she was given it on her engagement to Prince Fred of Prussia.

'Burning the water', was a way of luring salmon to the surface with burning heather at night.

A vagabond is a 'hide-i-the-heather'.

Proverb: Hard as the heather, lasting as the pine.

Proverb: Better the smoke of the heather than the wind of frost.

It's an old belief was that burning heather induces rain in spring. Does it seed clouds?

Heather is linked to the white goddess of love.

Bees are a Celtic symbol of wisdom, and heather, feeding them, is thus a source of wisdom.

Where would we be without a bit of weather forecasting? Prolific heather flowers presage a hard winter.

Heather flowers have been used since ancient times in place of hops for making beer.

An 18th century Act of Parliament banned non-hop beer, but its production carried on in Scotland in secret.

The Last Pict plunged to his death off a cliff rather than give up the secret recipe for heather ale. The full Heather Ale legend, as told by Robert Louis Stevenson is here: https://www.poetryloverspage.com/poets/stevenson/heather_ale.html

The next tree in the alphabet is aspen.