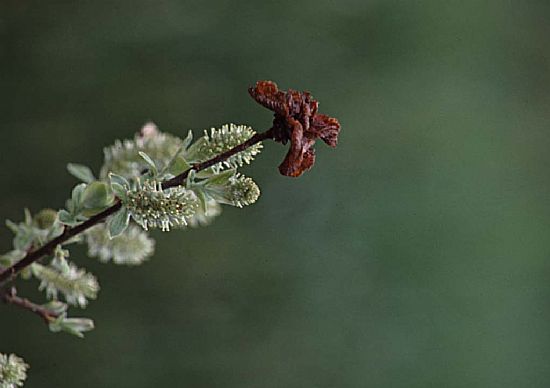 Willow (Seileach) is the fourth letter of the Gaelic tree alphabet (although there are some versions that place it fifth). There are many species of willows, which have a wide range of uses. As a tree of enchantment, willow also has many fascinating magical tales associated with it.

Here are the titbits of fact and folklore tweeted by @cybercrofter on 4 December 2011.

Today's tree is willow, the fourth letter (Seileach) of the Gaelic Tree alphabet.

Salacious and salach (dirty) have the same root as sallow.

Sallows are called sauch in Scots (as in Sauchiehall St).

Wickerwork carts called lupins pulled by Shetland ponies were 'a common sight on the streets of Inverness' in the 19th Century.

Willow bark can be used for tanning leather and nets.

Willow is good for fuel and charcoal. It is grown in short rotation coppice for fuel.

Writing/drawing charcoal is made from willow twigs.

Willow has male and female flowers on separate plants. It is pollinated by insects.

Willow pollen is very nutritious and important for bees in spring.

Willow seeds are dispersed by the wind. Bast is the fluff around the seeds. It's good kindling.

Willow bast can be used as cotton thread – twist a 3-ply cord into a circle to protect from evil.

Willow was an early coloniser after the ice age.

Willow 'strikes' easily from a cutting and it coppices vigorously. It is widely used for living structures and shelters.

Willow can extract contaminants from soil.

Hollow out a willow twig in early spring for a whistle.

Willow is good for woven hedges, to stabilise eroding river banks and as a sound barrier.

Willow bark used to be used to tie down heather thatch.

Willow has many healing properties. The bark is a painkiller, and the source of salicylic acid – best known as aspirin.

A decoction of bark was sometimes used as a quinine substitute.

Willow is associated with the expression of pain, and breaking of blockages in healing. (Aspirin relieves blocked veins by reducing clotting.)

Willow is associated with water. Carmina Gaedelica says: 'Choose the willow of the streams.'

Using willow on boats is considered taboo by some, yet it was used for making coracles.

Willow associated with Jupiter, whose priests were called Salii. 'As their worship was often of a sensual character, the willow has become associated with lust and filthiness.'

Spartan fertility rite: tie a man to a tree and whip him with willow twigs until he ejaculates, fertilising the land.

Do not cut willow while the moon is waning.

A white peeled willow wand was used to represent Bride, the earth goddess, in spring ceremonies and used for divination.

A willow effigy of Balder, consort of the earth goddess, was sacrificed on the fire at Beltane to give fertility.

Discerning witches prefer broomsticks made of birch twigs bound onto an ash handle with willow binding.

Black magic worked with a willow wand can be countered by rowan.

Pussy willow catkins in the home bring good health – in a sick room they will cool a fever.

Willow sap is contraceptive and controls bleeding (and cures warts). Its use in these ways is known as moon magic.

In the Scottish Borders, branches of willow catkins called 'palms' are gathered for Palm Sunday and taken into church (not many real palms in Scotland).

The weeping willow comes from China.

Travelling people made clothes-pegs from willow.
The Lord of the Isles carried a peeled willow rod of justice (12-15th Century).

Willow is much used for funerals – to wear willow means to be grieving.

Willow was sacred to Circe, Hecate and Persephone, all goddesses of death and mourning.

More sad stuff… Willow is a symbol of celibacy and forsaken love.

..and a sad poem. To the Willow Tree by Robert Herrick.  http://www.englishverse.com/poems/to_the_willowtree

Something a bit more cheerful. Strip the Willow dance represents the movement of peeling the bark off willow (which makes it easier for basketry) .

Beating a child with willow stunts their growth.


In many traditions, the baby sun god was set afloat in a willow basket then found by whoever will help him to grow up.


23 April is the festival of Green George, celebrated with a wicker effigy, woven with greenery.

Now for some magic spells… Throw a shoe into a willow tree. If it catches you'll be married within the year. Try up to 9 times!
Willow spell 2. To see your future husband run around the house 3 times with a stick – you'll spot him holding the other end of it.

Willow spell 3. Use willow for a rain-making spell.

Willow spell 5: To make a wish, explain why you want it to a willow tree, then tie a knot in a pliable shoot.

Willow spell 5b: When your wish comes true, don't forget to go back to say thank you to the willow and untie the knot.

Willow is the tree of 'witchery and ditchery'.

Willlow is a tree of enchantment.

Willow roots deep in the waters of the subconscious and gives rise to visions.

Willow buds grow in spirals, so its twigs are magical, especially when woven, in spirals, into a basket.

Meditation in a willow tree will gain you 'tree-top inspiration'.

The next tree in the alphabet is ash.

Back to the A-B-Tree page.