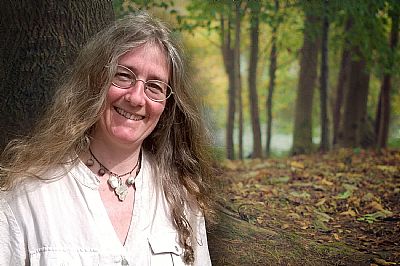 Note to event organisers: Please feel free to use any text or images on this page, and contact me for any additional information.

Mandy Haggith was born and brought up in Northumberland. After studying piano, philosophy, maths and artificial intelligence, she became an academic, teaching programming and developing software tools for land managers and foresters. Her PhD was about situations where people disagree, particularly about environmental issues. In the mid 1990s she left academia to write, carry out research and campaign for the world’s forests. Since 1999 she has lived on a coastal wooded croft in Assynt, in the northwest highlands of Scotland working as a freelance writer and researcher. In 2018 she returned to academia, and is now a lecturer in Literature and Creative Writing at the University of the Highlands and Islands.

Her forest-related work has ranged from research for the Centre for International Forestry Research, collaborating with scientists around the world, to helping community organisations (including Culag Community Woodland Trust and Assynt Foundation) to create visions and management plans for their land. As an activist she has lobbied at the United Nations, worked for a Green Member of the Scottish Parliament and for international environmental organisations including Greenpeace, WWF, Fern and Taiga Rescue Network.

The use of forests for the production of paper has been an abiding interest and from 2005-2009, and again from 2012 until 2018, she was co-ordinator of the Environmental Paper Network, a global network of more than 150 organisations campaigning for sustainable paper production. Her concern that the environmental and social impacts of the paper industry are poorly understood by non-specialists culminated in a book, Paper Trails: From Trees to Trash - the True Cost of Paper.  Published by Virgin Books/Random House in 2008, it was based on Mandy's five-month long global journey through Europe, Russia, China, South-East Asia and North America, witnessing where all the paper we use comes from.

Mandy is passionate about literature and has a master’s degree in Creative Writing, with distinction, from Glasgow University. She has had four collections of poetry published: letting light in, Castings, A-B-Tree and Why the Sky is Far Away. Her first novel, The Last Bear, was published by Two Ravens Press in 2008 and won the Robin Jenkins Literary Award in 2009. Her second novel, Bear Witness, was published by Saraband in 2013. Her third, The Walrus Mutterer, fourth, The Amber Seeker, and fifth, The Lyre Dancers, are a historical trilogy, set in the Iron Age. She has also written a non-fiction book and edited an anthology of tree poems, Into the Forest.

She has been awarded two Scottish Arts Council writer’s bursaries and a Creative Scotland artist award, and has won or been shortlisted for several poetry competitions. In the summer of 2013 she was the Poet in Residence in the Royal Botanical Gardens Edinburgh and in summer 2019 she is Poet in Residence in Inverewe Gardens. She regularly teaches creative writing and runs workshops and retreats.

Mandy plays an active role in her local community, and has worked and volunteered for many local organisations, particularly community landowners. She was a founding director of Top Left Corner, a community arts organisation and has served on the boards of other local social enterprises including Assynt Foundation. She is a keen sailor and proud of her skipper ticket.