Two new books on their way 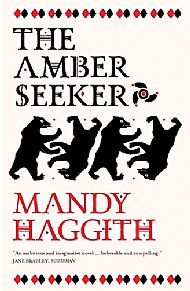 You wait for years and then two come along at once! Yes, I have two books coming out within about three weeks of each other later this spring. One is volume two of my historical novel series, and the other is a poetry collection.

The Amber Seeker is the second in my Stone Stories trilogy of historical novels, published by Saraband books. It follows Pytheas on the journey he was on in The Walrus Mutterer, but this time it's from his point of view. It starts before The Walrus Mutterer began, so we learn where he came from, and it follows his progress beyond where he was last seen in the first volume.

If you have read the first volume, you already know a lot about him - you might not like him very much. I wonder what you'll think about him after hearing his own account of his travels...

Why the Sky is Far Away is a poetry collection that gathers a lot of my ‘people poems’. Although I’m known more as a nature poet, I have written, over the years, quite a lot of poems about members of my family, about imaginary and mythical people and poems about human things like knitting, writing, walking, loving. They have come together in a pleasing way and I’m delighted that Red Squirrel Press are publishing this collection. Don’t worry, there are bear poems in there as well. I haven’t totally lost my grip!