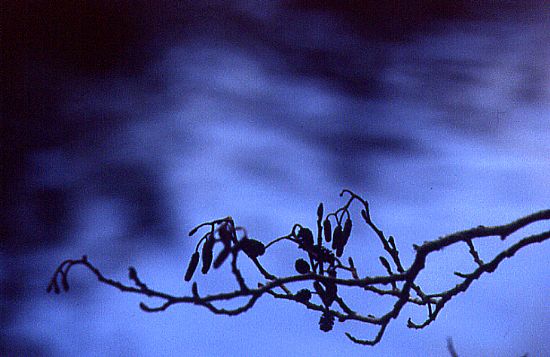 Alder (Feàrn) is the third letter in the Gaelic alphabet (although in some versions it's the fifth). It is a lover of swamps and an important pioneer species and bringer of fertility. Its many folklore connotations centre around its protective, shielding nature.

Alder is the third letter in the Gaelic tree alphabet (though in some versions it’s the fifth). Feàrn in Gaelic, or drumanach.

In Latin alder is alnus glutinosa, because it has sticky buds and leaves.

Alder pollen in soil is a key indicator of past wetlands.

Alder is quick growing – up to 1m/year. It coppices well.

Alder is the only broad-leaved tree to produce cones.

Alder has teeny-weeny seeds – 250 to a gramme – with little water wings, so they float.

Alder is called ‘Scots mahogany’. When the wood is first cut it is pale, then it ‘bleeds’.

Alder wood resists rot so was used for the piles of crannogs (island houses in lochs) - trunks placed upside-down to reduce capillary action.

Much of Venice is built on alder logs.

Alder is associated with protection. It was used for warrior shields, and its charcoal used for forging weapons.

On big treks, put alder leaves in your shoes as plasters for travel-weary feet.

Seamus Heaney writes wonderful poems about trees. Planting the Alder is one of them. And Kathleen Jamie’s Alder is a gem. http://happycatholic.wordpress.com/2011/04/06/alder-trees-two-poems/

Alder bark is good for tanning leather and fishing nets.

Alder bark is a tonic and gargle for sore throats.

Alder leaves are sticky – lay them wet with dew on the floor of a room to rid it of fleas.

Alder is a symbol of secrecy and a refuge for lovers and outlaws.

Diedre of the Sorrows fled Ireland to Scotland, with her lover Naoise to avoid marrying the King. In Glen Etive they hid among alders.

Diarmid and Graine hid from Finn MacCoul in alderwoods in Argyll.

The Greeks associated alder with Cronos, god of time.

You can see the past, present and future on an alder branch: last year’s empty cones, this year’s cones and next year’s catkins.

Alder is the perfect wood for making whistles and pipes. Druids used it to entice air elementals, whistling up the wind.

In old Norse, ‘the lengthening month of the waking alder’ = March = time to fast.

An old Scottish tradition was to put alder sticks around the grave of a barren woman or a childless man. As if childlessness is catching…