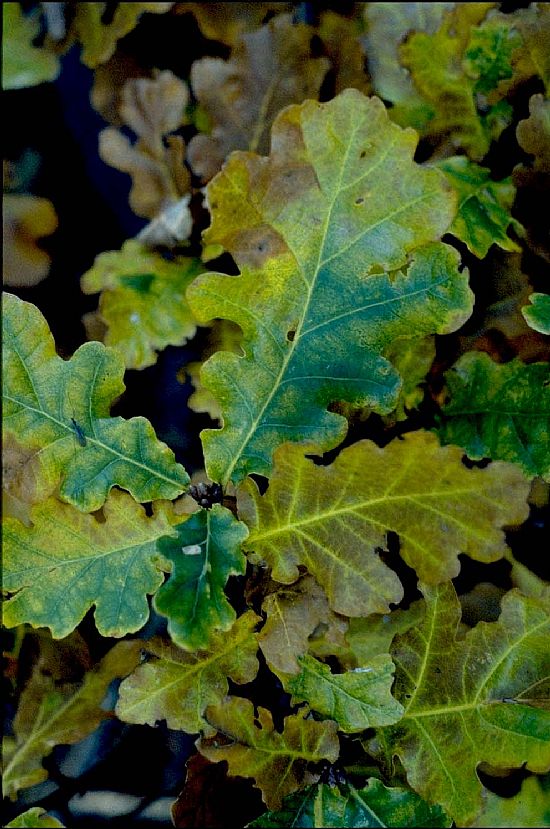 Oak is the seventh letter in the tree alphabet, standing for D as it is Duir in old Gaelic and Darach in modern Gaelic. This chunky tree is one of our best known and best loved and it provides habitat for a huge range of other species. Oak is traditionally the Lord of the Woods during the light months of the year (Holly takes over for the winter) and there is a wealth of folklore associated with it.

2 species of oak are native to Scotland: sessile (Quercus petraea) and pedunculate (Quercus robur). Quercus is latin for tree.

Here's a guide to some of the different oaks. https://www.treenames.net/ti/quercus/oak_trees.html #ABTree

Bears used to be native to Scotland, and acorns would be an important source of winter-fattening food.

Oaks have a second burst of leaves in July or August - ‘Lammas budding’.

At least 200 species of insects live on oak trees. More lichens live on oaks than on any other native tree.

Climate change may be good for the distribution of oak (or then again, it may not…)

The gaelic nick-name for a cudgel is ‘cuilbhear math daraich’ – good oak gun.

Acorns were an early food source – charred acorns have been found on Mesolithic sites.
Inedible until roasted or boiled & toxins leached out.

Oak woodland used to be measured by pannage – defining an area for pigs foraging for acorns.

The oldest boat found in Scotland was a 3000 year old oak dugout in Dumfriesshire.

A roman wheel with oak spokes was found in Dumbartonshire.

Oak bark was hugely valuable for tanning. In 1819, the bark of one tree was worth 10 x the value of its timber.

Oak bark is not good for tanning nets and sails as it hardens them. For leather it’s the best.

Oak is good for charcoal. The Bonawe charcoal smelter in Argyll maintained 10,000 acres of oak wood.

Oak burns slowly and steadily, releasing more heat per kg than any other native wood.

Felling oak without permission used to be a hangable offence.

Some of the earliest legislation was to protect oaks to be used for timber for building ships.

200 oaks from Loch Lomondside were used for Stirling Castle roof.

Oak was used to build crannogs - for roof shingles, roof beams and frames.

Oak wood is used for doors. In fact door and 'duir' and 'darach' (Gaelic) have the same root, as does 'druid'.

Oak is good for building roofs – a roofer will look for branching trees, good for forks, crooks and knees.

Wooden joints and pegs used for joinery with oak because the wood is so hard it bends nails and its tannins corrode them.

Watch out, the tannins in an oakwood chopping board will corrode a knife left lying on it.

Chew oak apples to cure toothache. The tannin in an oak toothbrush twig strengthens the gums.

Oak apples can be used for ink.

Oakwood is too heavy to make a harp.

A traditional yeast stick (for brewing) was made of twisted oak and would last 20 years.

Acorns can be roasted and ground as a coffee substitute.

Powdered bark makes a gargle for sore throats, checks vomiting, helps to heal wounds and is an antidote for poisons and bites.

Oaks can be coppiced on a 24 year cutting cycle – divide the wood into ‘hags’ and cut one each year.

Acorn haiku by Kit Wright: Just a green olive/In its own little egg-cup/ It can feed the sky.  #haiku

My Oak is a lovely poem by Jo Shapcott from her collection, On Mutability. She reads it on this podcast. https://www.brookes.ac.uk/poetry-centre/podcasts/episode-7--jo-shapcott/

An oak song by the Bowerbirds: https://www.youtube.com/watch?v=ig0FZVnwec4&app=desktop

Oak is a symbol of courage, and is sacred to druids and kings. Druids and the Green Man wear a crown of oak leaves.

Oak is associated with the earth god Daghda. It also has a mythical connection to stags: sometimes called the horned tree.

The Wallace Oak, the Capon Tree, the King of the Woods (nr Jedburgh) and the Burnam Oak were all trysting places for rebel armies.

Oak is the clan badge for Camerons.

It's dubious tree-related weather forecast time again... ‘Ash before oak, we’ll get a soak, oak before ash, only a splash.’

Oak is the most likely tree to be hit by lightning, and it's associated with thunder. Join the dots between the next few tweets...

Oak is sacred to Thor, the Thunder God, who put mistletoe on the oak by lightning. His hammer Mjollnir was made by dwarfs from oak.

Columba came from Derry (oak placename) and loved oak so much he built an oak chapel on Iona.

To divine the state of the nation, open an oak gall and see who is there: ant = plenty of grain; spider = pestilence; maggot = murrain; fly = war; creeping worm = scarce harvest; turning worm = plague.

A flock won’t thrive unless the shepherd’s staff is oak.

Protect yourself from harm from fairies by drawing a circle around yourself with an oak stick.

Carry an acorn in your pocket to bring good luck and give courage.

Mistletoe grows on oak and is powerful protection against magic. Wrens in oak trees are sacred.

In Celtic summer rituals, oak represents the sun god as he impregnates the earth goddess.

Oak is burned in ceremonial summer fires, the body of the oak king sacrificed to make way for the holly king.

In Rome, oak was sacred to Jupiter (sun god).

Mughna, one of the ancient irish Marvel Trees, bore acorns, apples and hazelnuts to ‘satisfy all man’s needs’.

Until Zeus took it over, the Greek goddess Diana had a sacred grove at Dodona. Jason’s Argo was built of oak, with a sacred beam from Dodona.

King Arthur’s Round Table was oak (as was Merlin’s wand). King Arthur is said to be buried in an oak coffin in Glastonbury Abbey.

Royal Oak Day is 29 May, since King Charles II hid in an oak tree and adopted it as his emblem.

In Ireland early Christian missionaries took pride in cutting down sacred oaks. Yet felling one was said to cause a death.

It is traditional to marry under an oak tree.

Place 2 acorns in a bowl of water to see if 2 lovers will stay together or part.

To make an errant wife stay home, place two halves of an acorn in her pillow.

If you find two acorn halves in your pillow, join them back together and your spouse will never know what you're getting up to ;-)

A lot of acorns means a hard winter to come.

Oaks are the main source of pyroligneous acid, a dyeing mordent.

Dryden: The monarch oak, the patriarch of trees, /Shoots rising up, and spreads by slow degrees, / Three centuries he grows, and three he stays / Supreme in state, and in three more decays.’

Bathing the feet in oak leaves or bark will ease soreness and help you find a good pathway through life.

And finally, Live thy life... like thon oak...Tennyson's poem, The Oak: http://poemhunter.com/poem/the-oak-2/

The next tree in the alphabet is holly.