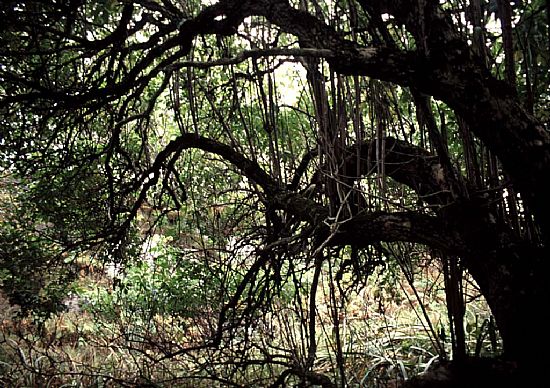 Elder is the 13th letter in the Gaelic tree alphabet, representing R (Ruis in old Gaelic, Droman in modern Gaelic), and is the last of the consonants. Elder is a sprawling, twiggy tree much associated with human habitation in the Highlands of Scotland, though it grows more widely in hedgerows elsewhere. It has dishes of white blossom and subsequent bunches of glossy berries and many magical properties.

Here are the nuggets tweeted by @cybercrofter on 13 December 2011.

Elder is the 13th letter in the Gaelic tree alphabet, the last of the consonants - Ruis in old Gaelic, Droman in modern Gaelic.

In latin, elder is Sambucus nigra. Sambuca is a kind of harp.

Elder is used to make many musical instruments, including whistles, flutes, pipes and bagpipe chanters.

Elder may have got its English name from Hylde, the Norse goddess.

Elder is also called ‘Stinking Tree’ because of its smelly leaves.

There is a wise old woman, The Elder Mother, who lives in the elder tree.

Burning elder wood might bring a death in the family. It sometimes screams if you put it on a fire.

Elder pith (from inside twigs) is good tinder. After extracting, use stems as bellows or pipe for fires.

Elder produces big dinner-plate blossoms made of masses of tiny 5-petaled  flowers on stems in clusters of 5.

Drink elderflower tea to stop a head cold or cough.

A bunch of elderberries is called a drupe.

More elder recipes please – there must be loads of them out there!

Elder twigs used to make ‘dromanach’ – pegs to hold thatch down on a roof.

Elder wood is good for bowls, spoons and forks.

Elder wood can be used for fishing rods and the pith for floats.

The Elder Tree – a poem by Jay Howard http://jay.howardesign.com/eldertree.html

Some believe Judas Iscariot, who betrayed Jesus, was hung from an elder tree. Elders often have a fungus called Judas' ears.

An elder tree by your house puts off flies (and evil spirits). Elders mostly grow near houses in the Highlands.

Elder leaves outside your front door stop witches coming into the house.

Elder leaves on stable door stops the goblins riding your horses at night.

Leave milk or a cake under the elder tree for the fairies for good luck.

Wear elder leaves in your hair for good luck.

Dab your eyes with elder to see into people’s secrets.

Elder protects against lightning and thunder.

If you sleep under an elder tree you might wake up in fairyland.

At midsummer, stand under an elder and the King of the Fairies might bewitch you, unless you have iron on you.

To cut elder wood you must say, three times, ‘Elder Mother, please give me some wood, and I’ll give you some of mine when I grow into a tree’.

When elder flowers, it’s time to sow grain seeds in the fields.

Wash your face in dew from an elder tree to become beautiful.

Scatter a few elderberries for a blessing.

The spirit of the elder tree knows if you have done something bad and makes you red-faced with shame.

The spirit of the elder tree also knows if you have done something good and makes you blush with pride.

Pick elderflowers at full moon to make a drink to sing like a bird.

Finally a poem about Elder by P J Kavanagh. http://www.legendarydartmoor.co.uk/elder_tree.htm

The next tree in the alphabet is pine.