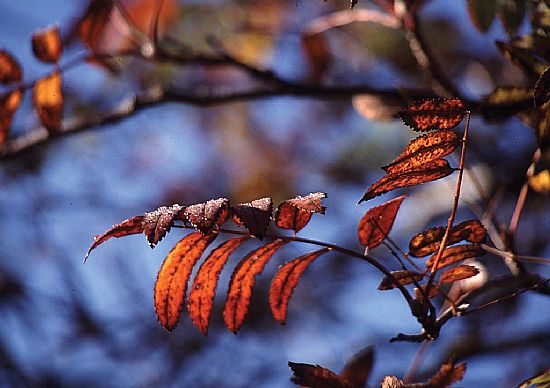 The second letter in the Gaelic tree alphabet is Rowan (Luis in old Gaelic, Caorann in modern Gaelic), one of Scotland's most elegant and hardy trees. It is dispersed by birds to all kinds of remote, craggy spots, which means you can come across it in the most unlikely places, and its fronded leaves, sweet-scented blossom,  profuse bright red berries and smooth grey bark make it a joy to encounter. The folklore on rowan is dense with magic and mystery.

Here's a poem by Mandy. It was first published in letting light in, her first poetry collection, produced by Essencepress, now sadly out of print.

The rowan grows tall
passed over by all
storms
it forms
here in the open wilds
the perfection of a child's
painting of a tree
untested by tragedy.

Here's another poem, packed full of lore, by Colin Will. Thanks to him for permission to reproduce it here.

Guardian, gate-keeper, path-protector,
you ward against the threat of evil
at the entrance to this house.

Stream-sentinel, rock-bound,
above a clefted torrent,
your tough roots purify the water.

In the glens, your red fruits
beckon blackbirds, thrushes,
to their astringent feast.

The barren seek your boughs
to bed beneath, assured conception
and a safe carriage.

Your power, enchantress, is in your leafy shield;
a berried blessing, sanguine, steadfast.
Stand so for us, for all your green hands shade.

Rowan is the second letter in the Gaelic tree alphabet.

There are up to 100 species of sorbus. The rowan, or mountain ash, is sorbus aucuparia. sorbus=fruit. aucuparia=for catching birds.

Large flocks of fieldfares and redwings come to Scotland from Scandinavia in autumn, to feast on rowan berries.

Rowan is also called ‘Fowler’s Service Tree’ because the berries were used as bait for birds by trappers (fowlers).

Rowan is browsed preferentially by deer and sheep, and often often grows on crags and cliffs where teeth can't reach.

Rowan's boudoir-scented flowers have 5 white petals and 5 sepals, and its blood-red berries bear the magic pentogram.

The very peculiar rust fungus gymnosporangium cornutum spends part of its life-cycle on juniper and the rest on rowan.

To make rowan jelly, boil equal weight of berries and apples, strain overnight (don't squeeze) then boil with with sugar, 1lb for each pint until it sets.

Rowan berries are high in vitamin C. Eating them will add a year to your life. A magic tree's berries turn a 100 yr old back to 30!

The name rowan comes from Norse ‘raun’, which means ‘charm’ or ‘spell’.

All together now... A traditional Scottish song is The Rowan Tree, by Lady Nairne (Carolina Oliphant). Played on the pipes here.

A rowan walking stick will help you find your way in the dark.

Rowan protects against evil spirits and witchcraft. ‘Roan tree and red thread /Haud the witches a’ in dread.'

Rowans are traditionally planted by houses to bring good luck and keep evil away.

Fasten rowan to the halyard of a boat to keep it safe from storms. Fishing poor? Tie a rowan twig to your line or net.

Cross-beams of chimneys are called ‘rantrees’ because they were often made of rowan wood, to protect the house from evil spirits.

Put rowan sticks above door lintels and above cattle stalls to stop bad spirits coming in.

Kathleen Raine is supposed to have cursed Gavin Maxwell’s rowan tree and he had all bad luck from then on.

Rowan is used for spindles and spinning wheels, because spinning is magic.

Binding a rowan twig to a cow’s tail will keep it healthy.

According to Osgood Mackenzie, milkmaids used a hobble, called a ‘buarach’, made of strong hair rope with a loop at one end and a large rowan button on the other, to stop milk-loving fairies stealing the milk.

The Celtic goddess Brigid had three magic arrows made from rowan: one each for knowledge, wisdom and inspiration.

In the middle ages, rowan wood was used to make bows.

It is very bad luck to fell a rowan tree, or even to cut a stick, unless it is for ceremonial use.

Burning rowan wood is taboo. Druids burned rowan to summon fierce spirits into battle.
Vikings believed that the first man came from an ash, the first woman from a rowan.

Include a rowan in a coffin, or put a rowan stake through a corpse’s heart, to prevent that person coming back as a ghost.

Wear a necklace of rowan berries for good luck.

Make love under a rowan to cure barrenness and conceive a boy.

Rowan trees were planted in graveyards to protect the threshold between the living and the dead.

At Beltane, lambs and sheep had to jump through a rowan hoop, for luck.

Many rowan trees growing in sacred places are protected by dragons.

A cross of rowan twigs tied with red string will protect from evil spirits at Hallowe’en.

Warriors gathered under a rowan for good luck in battle.

Druids went into ritual trances on ‘The Wattles of Knowledge’, a bed made of rowan sticks. My bed awaits...

And finally, to see into the future drink spirit distilled from rowan berries.