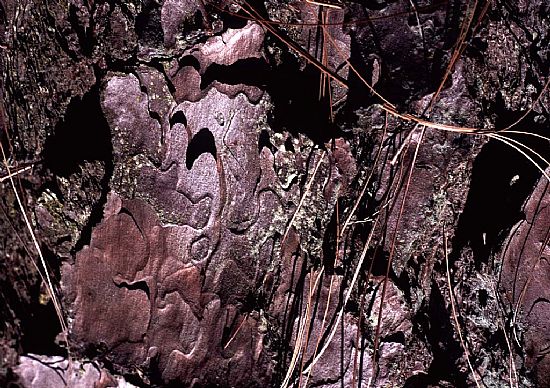 Pine is the 14th letter in the Gaelic tree alphabet and the first vowal, A, (for ailm, though the modern Gaelic is Giuthas). The Scots pine is a keystone species of the Caldedonian forest, and our only native conifer tree. It can grow to prodigious size and is host to many charismatic species such as the Scottish crossbill, capercaillie, pine marten and red squirrel. As an evergreen it is symbolic of immortality and has long been considered a sacred tree.

Pine is the 14th letter in the Gaelic tree alphabet and the first vowel, A, (for ailm, though the modern Gaelic is giuthas).

The Scots pine is a keystone species of the Caldedonian forest, and along with yew and juniper, one of the UK's few native conifer trees.

Scots pine needles grow in pairs, flat on top, rounded below, with a blue waxy sheen. They are shed after about 3 years.

Scots pine seeds have one wing, so they spin on the wind.

You can often find three generations of cones on one pine branch.

Scots pine is host to many charismatic species such as the Scottish crossbill, capercaillie, pine marten and red squirrel.

The Scottish crossbill is a kind of parrot and depends on Scots pine.

We meet by a charm of crossbills, by Marion Macready (in a rather wonderful book of bird poems). http://drfulminare.com/birdbook.html

After the ice-age pinewoods covered up to 1.7 million hectares of Scotland. By 2000, only 18,000 hectares remained.

Most of Scotland's pine forest was destroyed for timber and sheep. Devastated during WW1&2 for building, and particularly in the north, ammunition boxes.

Pine is widely used for making paper pulp and chipboard.

Scots pine timber should be cut on a waxing moon, as the sap is tidal, to ensure it is full of resin and therefore flexible and water resistent.

Pine resin is used as varnish, paint and tar for sealing planks and barrels and waterproofing boat hulls.

Pine resin is being used as an alternative to plastic.

Pine resin was used as an ointment for boils and sores, and to make a potent wine.

Distill turpentine out of pine resin, and the residue is rosin, used to wax violin and cello bows, for paper sizing, sealing wax and papier mache.

Turpentine is a solvent, used in varnish and oil paints, as antiseptic and as a vermifuge for animals.

Pine roots and stumps were used for lighting – strips, called 'rosety roots' burn like candles due to the resin in them.

A metal device for holding pine root lights was called 'a puir man', because beggars formerly had to hold them.

Pine roots were used to make a very buoyant rope, excellent for marine use such as hawsers.

Pine roots were woven into creels and the needles can be used for very tiny baskets.

Pine oil is good for colds and bronchial remedies, as it is antibacterial.

Pines cheer you up. The scent of pine diffuses despondency and despair, guilt, self-condemnation and over-conscientiousness.

Scots pine, as an evergreen, is symbolic of immortality. Proverb: as hard as the heather, as lasting as the pine.

Many cloutie trees are Scots pine, such as the tree at the top of the Fairy Trail near Aberfoyle.

Scots pine is the tree of heroes and was planted on warriors' graves.

In legends and history, battles were often fought in or near pine forest.

Pine was sacred to Artemis, the Greek moon goddess.

Pine cones are a masculine fertility symbol. Carry a pine cone in your pocket to increase vigour.

Pine was associated with gods of wine – like Dionysus and Bacchus.

Greek goddess Rhea (married to her boring brother Cronus) had a lover Atys, who when unfaithful she turned into a pine....

...Rhea missed Atys and wept under him, so Zeus let him keep his leaves forever and this is why pine is evergreen.

Druids burned pine at the winter solstice to celebrate Druantia, queen of the druids, and to bring back the sun god from the underworld.

In Irish lore, pine means 'the beginning of answers,' 'the loudest of groans' and represents the sound of lovemaking or childbirth.

Pine grants the power of far-sightedness and insight.

Pine cones grow in a clockwise spiral, which fills them with magical energy.

Pine pollen is used in money spells to attract gold.

Pine cones are a symbol of prosperity (which is why they are often on gates and railings).

In many cultures, pine is associated with birth – perhaps because storks like nesting in them!

The next tree in the alphabet is gorse.