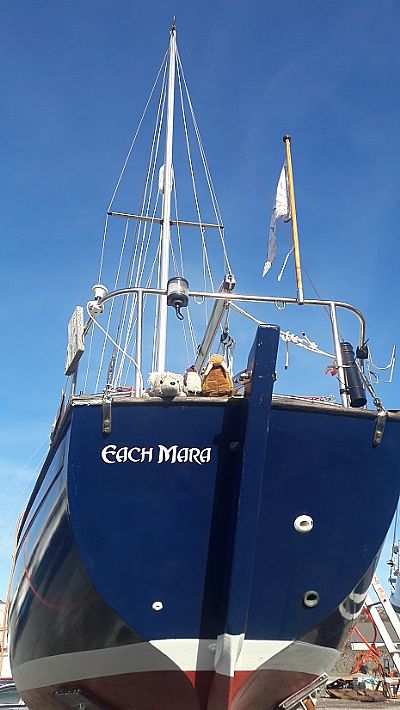 Lochinver harbour’s pontoons are exposed to northerly gales, so most of us take our boats out of the water for the winter. They lie on cradles on the hard standing behind the fish market, as if in hibernation. Now, as the geese fly over, they are awakening. Ladders are up, paint brushes are out, hammers and drills are going at it. There’s that smell of anti-fouling. Conversations are taken up where they left off last season. New faces, where boats have changed hands, introduce themselves. The list of spring jobs seems to get longer rather than shorter.

Yesterday we painted the white waterline stripe and I spent a happy while butt-ending ropes together with whipping string and a big needle. Then there was the great satisfaction of pulling a bonny new halyard and a gleaming green new topping lift through the mast and out by the sheaves, then detaching the old ropes and coiling them up for spares. The new lines make the remaining ones, which looked fine before, seem tatty and faded. It’s all relative. They’ll be fine for another year or so.

This is one of the jobs that’s easiest to do when the mast is down, particularly if it goes wrong and the ropes come apart, which thankfully didn’t happen. We’re renewing the standing rigging this year, so we craned the mast off a few weeks ago (the picture here was taken last year).

We are now waiting, on tenderhooks, to get the mast back up again so we can put the boat back in the water and start sailing. Meanwhile we’re taking the opportunity to do all kinds of other upgrades. As well as the new ropes, we’re renewing the steaming light, the VHF radio aerial and cables and installing an anemometer. We’re told our sailing experience will be ruined by putting an end to those conversations about whether it’s gusting 5 or 6, or even 7, whether it has shifted a bit off the nose yet and which of the weather forecasts got it right. I’ll believe that when it happens. We'll no doubt just be having conversations about how unreliable the anenometer is, as well as all of the above.

I’m one of only three women working on their boats. It seems odd that it is such an overwhelmingly male occupation, but a quick glance at a boating magazine reveals all-male columnists, all-male ‘ask the expert’ panels and women featuring only in adverts, and then mostly young, buxom and blond, wearing shorts and crop-tops. None of us in Lochinver harbour fit that description! I know more than one sailor who bemoans the fact that their wife or partner doesn't like to sail with them, but why not? Along with rabbits and green things, there were in some places old taboos about women on boats, but I’m not sure that really accounts for our minority status. Can anyone out there shed light on this?