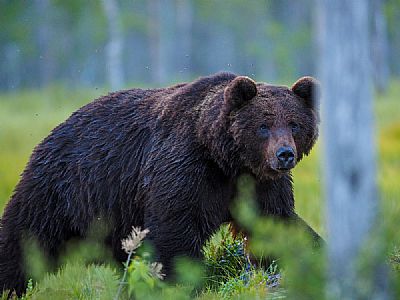 Anyone who has read my novels (special offer here!) won’t be surprised that I’m in favour of the reintroduction of carnivores to Scotland. It’s an obvious solution to the problem we face of over-sized populations of deer. As usual I’m running a car with a massive dent in the bonnet, following a collision on the road at night, driving through a landscape denuded of its natural vegetation through over-grazing. It was the third stag we’ve hit in recent years, and so far we’ve been lucky to get away with just bruised metal. Our deer levels are dangerous.

They’re also expensive. I’m a board member of Assynt Foundation, our community trust that owns 44,000 acres of former sporting estate, on which there are thousands of deer. Our head stalker, having spent the winter shooting them, believes their health and physical condition is deteriorating due to lack of food, but with no natural predators to keep their population under control, it is an endless struggle to cull enough of them.

A few hungry carnivores is the obvious answer.  Lynx, wolves and bears belong here. We have bones of lynx and bears in the caves, and wolves are in the historical record. I believe many people would welcome them. When I launched by second novel, Bear Witness at an event called ‘How Wild Can We Go?’,  there was overwhelming local support for introducing, eventually, our full complement of carnivores. We’d need proper livestock security grants and compensation systems, such as they have in other countries, but that’s not rocket science.

I therefore follow with interest the burgeoning dialogue about ‘rewilding’ over the past decade, in which someone clearly needs to speak up for bears. I am intrigued (and not a little bit frustrated) that Rewilding Britain completely ignores bears. Wolves and lynx get their support, but they don’t even acknowledge that bears are native to Britain. What is the reason for this blind spot?

Fortunately Rewilding Scotland is more savvy about our native carnivores, recognising that bears are part of the mix, and the wonderful bear image up above comes from their webpage. However, even they express remarkable ignorance about these animals. Their webpage says: ‘Very little has been written about the ecological benefits of reintroducing the bear, although people in general are enthusiastic about its potential return...’

I suggest the rewilders read Bear Witness, specifically, page 87, where Professor Petr Scazia explains that the principal ecological benefit of brown bears is as seed distributors. They love all kinds of nuts and fruit – acorns, hazelnuts, brambles, raspberries, cherries and so forth – and spread their seed in handy dollops of fertiliser.

I was told by a bear ecologist that bears may be responsible for the origin of desert apples in Central Asia, where the native, small bitter apples evolved into a sweeter fruit. Over many thousands of years, bears applied selective pressure on the apple trees by preferentially eating the biggest, sweetest apples and distributing their seed.

Bears were a big help to oak and hazel as they made their way north fairly rapidly across Britain after the last ice age. There are no jays up here to distribute these big tree seeds.

Bears play a crucial part in ecosystems where they are found, enriching the forests in ways that provide autumn food sources not only for future bears, but for all kinds of other species too, from butterflies to birds. If we want a richer, wilder ecology in Britain, bears will be a helpful part of it.

Both wolves and lynx have substantial organisations backing their reintroduction – the lynx has the Lynx UK Trust, and wolves have The UK Wolf Conservation Trust, educating people about their benefits. Perhaps bears need something similar.