When Pytheas travelled around Britain in the Iron Age, he probably hitched along on trading vessels, which would have been carrying slaves as well as metals, jewelry and other valuable commodities. No doubt his views about slavery, as a citizen of a Greek colony, would have been radically different from ours. Slaves were far more numerous in Greek societies than free people. He most likely owned some himself.

What is less clear is what role slavery played in the society he encountered here on the western shores of Alba and in the Northern Isles and Hebrides. But there would have been slaves, and a trade in them.

A core character of my novels about Pytheas is a slave, and so I have had to do a lot of imagining about what enslavement might feel like. Some books have helped a lot: Property by Valerie Martin, Beloved by Toni Morrison, Joseph Knight by James Robertson among others. 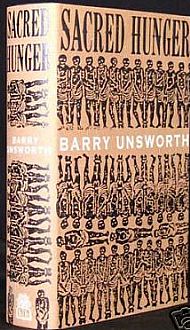 I have just read an extraordinary novel about the eighteenth century slave trade: Sacred Hunger by Barry Unsworth. It won the Booker Prize in 1992, deservedly. It's beautifully written, and the main character, a doctor, Matthew Paris, is deeply sympathetic and complex. The nautical descriptions are absolutely fascinating and the book raises deep questions about power relations. I can't recommend it highly enough.

And last night I watched '12 Years a Slave', a hugely powerful film made by Steve McQueen, starring Chiwetel Ejiofor as a free man who is captured and taken into slavery in nineteenth century America. It's based on a true story and vividly shows the psychological processes of enslavement.