For the past few weeks we have been on the boat most of the time, making the most of the back end of the sailing season. We grabbed the nice easterly wind and glorious autumn weather of October and sailed across the Minch, and based the boat on the pontoons in Stornoway Harbour. This wasn’t just because it’s a lovely town. We had an ulterior motive.

Last weekend was Faclan, (words in Gaelic), the book festival. It turned out to be more than just a book festival, with film and music playing a significant role. Somehow I find that the best of the arts happens when the boundaries of media blur, and so it was no surprise that some of my favourite moments in the festival were the hybrid events. 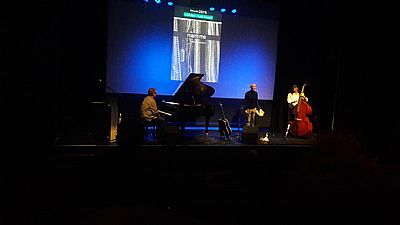 One of these, Maritime, was a spell-binding reading by poet Ian Stephen of some of his sea-poetry woven into a jazz performance with Peter Urpeth on piano and Gary Carr on double bass. And I don’t just mean interspersed, I mean woven, as tightly as a fishing net.

Peter Urpeth had a second gig in the weekend, creating the soundtrack for a silent film, Nanook of the North, a documentary drama about an Eskimo hunter. No bears were killed in the making of the film, thankfully, though a walrus and a seal met their ends. In fact countless fish, seals, basking sharks and whales were harpooned, gutted, speared and otherwise massacred throughout the films over the  weekend. It wasn’t a particularly vegetarian-friendly programme of fare, though as the theme was the North Atlantic, perhaps this shouldn’t be surprising.

‘North Atlantic’ was the title of my favourite film of the festival, a staggering work of only a few minutes duration – perfect drama, two characters, an awesome ending. I won’t spoil it in any way. If you get a chance to see it, grab it. It’s brilliant.

Other highlights were Jackie Kay giving one of her hilarious, joyful, moving readings of poetry; Man of Arran, a nail-biting drama about people living on the edge of the Atlantic; an understated and fascinating presentation by Mallachy Tallack about ‘undiscovered’ islands; and a riveting talk by James MacDonald Lockhart about a walk, which felt like a flight, across Britain, in search of raptors.

There were disappointing events too. Philip Hoare had an evening devoted to his documentary and his book Leviathon, and though there was much that was intriguing in both, I felt in the end both overwhelmed by words and voice and underwhelmed by ideas. It did make me remember, however, that I have unfinished business in the arctic, to grope towards an apology to whales, walrus and bears on behalf of the humans who have massacred them over the past few hundred years.

For me the best discovery was Madeleine Bunting, who talked about her book, Love of Country, which has rocketed to the top of my ‘To Read’ list. Chaired in an exemplary manner by David Green, she spoke about the Hebrides in such an intelligent, absorbing way that I wanted her to talk on and on. She read, beautifully, vivid landscape descriptions and talked about her experience of landscape beginning with people, echoing absolutely my own love of this place as a cultural land and seascape. She talked about writing as akin to labour on the land, and I found myself smiling as she talked about composting her research. I, too, have a folder called ‘compost’ (and other called ‘nursery’, where the pieces that need tending are kept).

And now it’s back to the sea. Hopefully it’s not too late in the year to get one final sail home to Lochinver, over the Minch, this crazy corner of the maritime world.