The day before National Poetry Day, Wednesday 5 October, saw a small group of people disappearing off into Culag Woods from Lochinver harbour, to scatter poems like leaves among the trees.

We brewed up kelly kettles for tea, cooked marshmallows and read poems in the dappled, smoky sunlig 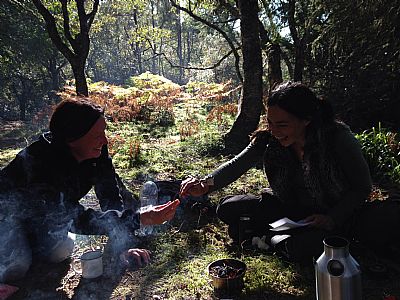 ht. Trees whispered back in the breeze. There were plenty of laughs, daft stories and a chance to revel in the simple pleasures of good company in a lovely place, scented with leaves and woodsmoke. We scribbled poems, wishes and thanks on luggage labels, reflecting the poetry day theme of 'messages'.

I read out some of the poems from my new pamphlet, A-B-Tree, which has a tree poem for each letter of the Gaelic alphabet (you can hear some of them on this podcast). Since ancient times there has been a native woodland species linked to each letter and I am endlessly fascinated by this connection between trees and writing. I began with the birch poem, because birch is the first letter of the alphabet and the folklore of birch is all about beginnings, and ended with yew, the final letter, with a few of the others in between. Many of the poems in the collection play with ideas from tree folklore. There's also a concertina of photographs by Bill Ritchie, and the traditional ogham script and old Gaelic names of trees feature in both the poems and pictures.

Other people taking part read favourite poems as well, or poems they'd written. Romany Garnett read her lovely rowan berry poem, and we had others by Seamus Heaney, Emily Bronte, Mike Stocks, Alan Spence and Mary McCabe. Some of these, and the messages we wrote on the day, we have hung from twigs and branches, especially around the wishing tree, so if you are in the area and want to enjoy some tree poems on National Poetry Day, head along to the woods.

If you would like a signed copy of A-B-Tree, you can get it from this web page by paypal or contact me if you want to buy it some other way. It costs £6. I'm not charging for postage at the moment, but at some point I will have to, so to get a bargain buy sooner rather than later!