20 August 2016
Why sailing against the tide is boring

For the past few weeks we have been sailing to Orkney, around the islands, and back. It feels like a major achievement to have rounded Cape Wrath, Britain's top left corner, in both directions. As always when we make a significant journey I am left with respect for the Iron Age sailors who managed it without weather forecasts and Admiralty charts, let alone GPS, VHF radio, a life boat service and a liferaft. 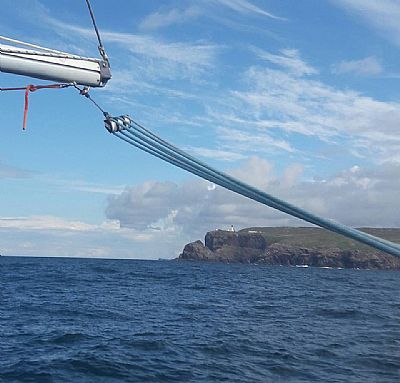 The challenge was not so much the sailing, as picking the right moment to go with a reasonably slight sea state and helpful wind. The sea conditions can quickly become mountainous, with the whole breadth of the Atlantic to the west and nothing but sea to the north all the way to the Arctic. It's a three day trip and beating against the wind would not have been funny.

As well as picking the right day, getting the timing right is crucial as the tides are strong both around the Cape and in the Sound of Hoy, so strong that it's not possible for our boat to make way against them. I wonder how Iron Age mariners could have handled this. Presumably the local lore was strong and passed from generation to generation, but keeping track of the actual state of the tide would have depended simply on watching the water.

Even armed with the Amiralty tidal atlas, the pilotage book and Orkney marinas' (very helpful) tidal notes, I soon learned that the tides don't always play 'by the book'. Chatting with fishermen, harbour masters and other sailors, I've learned that a westerly swell can bring the flood forward, a strong wind can beat a weak tide and even high or low pressure can alter the time of the shift from ebb to flood or back again.

But when the tide flows, wow, it flows. We had some exciting days, like going down Einhallow Sound at nearly 12 knots (almost twice our boat's normal top speed), hurtling from Rousay to Kirkwall in no time at all, screeching into Stromness at 9 knots with the ferry on our tail, and a sweet morning sail to Pierowall when we arrived 2 hours ahead of schedule. There was inevitably also the day we got it all wrong and went nowhere at all for 3 hours (learning why the verb for sailing against the flow is 'to bore the tide'). We had a trip out of Stromness that was 8 miles one way and only 5 back, and another passage where the outward journey was fully 7 miles shorter than the return. All because of the flow of water.

Pytheas, coming from the almost tideless Mediterranean Sea, must have been gobsmacked by the Orkney tides and would have surely been impressed by the knowledge of the local mariners who could use the moon to predict the ebb and flow. No wonder, when he saw the Ring of Brodgar, he declared that the people there must have had prodigious astronomical knowledge since ancient times.