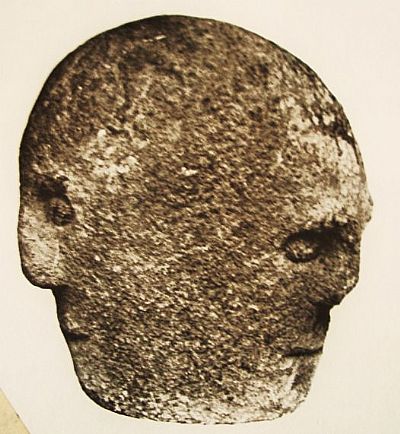 For the past four years I've been writing a historical novel set in the Iron Age. It is inspired by the amazing journey of Pytheas of Massalia, an ancient Greek who was the first Mediterranean (as far as we know) to circumnavigate Britain. He wrote a book called On the Ocean, which is lost, but from some of the fragments that remain (quoted by other Greek and Roman authors) we know he made landfall at precisely this latitude on the west coast of Scotland. I have been intrigued for years by this, and obsessively imagining what he may have encountered, researching Iron Age artifacts and buildings and sea-faring and travelling to other places Pytheas visited on his journey.

Various artifacts I have come across have ended up in the story, including a three-headed stone in the National Museum of Scotland which was found in the Lairg postal district (which includes here). The picture here is a different three-headed stone but the Scottish one is similar (rather more worn, with a dimple on the top). They are mysterious - perfect for a novel.

In 2015, Creative Scotland gave me a grant which enabled me to focus full-time for six months on getting the novel written and rewritten. The result is a big book in three parts, or a trilogy. I've made a submission to Saraband, who published my previous novel, and I await their decision about whether they'd like to take this one. Wish me luck, and watch this space!