I have had a fantastic time as poet in residence at Inverewe Garden during 2019, which culminated with a joint exhibition of work with five other women artists ('Wise Women of the Earth') with whom I've been lucky enough to collaborate over the summer.  I am absolutely delighted to be asked back to continue being in residence so I will be visiting frequently for the next two years. I'm even more excited to have been asked to create a solo exhibition in May 2020. I don't think poets often get invited to do exhibitions! More news about that will come soon.

I produced two main pieces of work for the exhibition (as well as contributing to several other joint pieces). One is called 'Listen Feel Wonder Under' and it's a floor piece that was installed under a totem pole sculpture led by Ann Coomber. The paper leaves spelling out 'Listen', 'Feel' and 'Wonder' were created by my fellow artists and written on by members of the public and gardeners - each of these words is a poem in its own right. 'Under' is a poem by me written on the roots. Together it feels as if it represents a sort of collective unconscious response to trees and how important they are for our cultural roots. 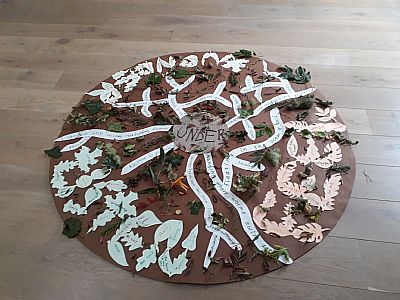 My other piece was joint with singer, songwriter and story teller Dorje Khandro Dawid, and it is an aural songline to accompany a walk around the garden. It is in three movements: an opening walk from the peace garden to Camas Glas to introduce the main themes, a slow movement up to the high viewpoint contemplating our impact on the planet and a final exuberant scamper back down to the shore. I narrate each movement and Dorje Khandro invites you to sit on a bench at each of the three end points where she tells you a story. This was a real adventure for me as I worked entirely unscripted, using improvisation around a structure with refrains to create my 'poems'. I learned a lot in the process! You can hear the songlines even if you can't get to the garden. They're here at the Galleries at Inverewe website.

I have written a reflective piece about the process of the residency, which I'm happy to share with anyone interested.

Three of the other women artists from this year's residency, Lynn Bennett-Mackenzie, Ann Coomber and Dorje Khandro Dawid, will also be in residence over the next two years and we are already plotting what we would like to do together.