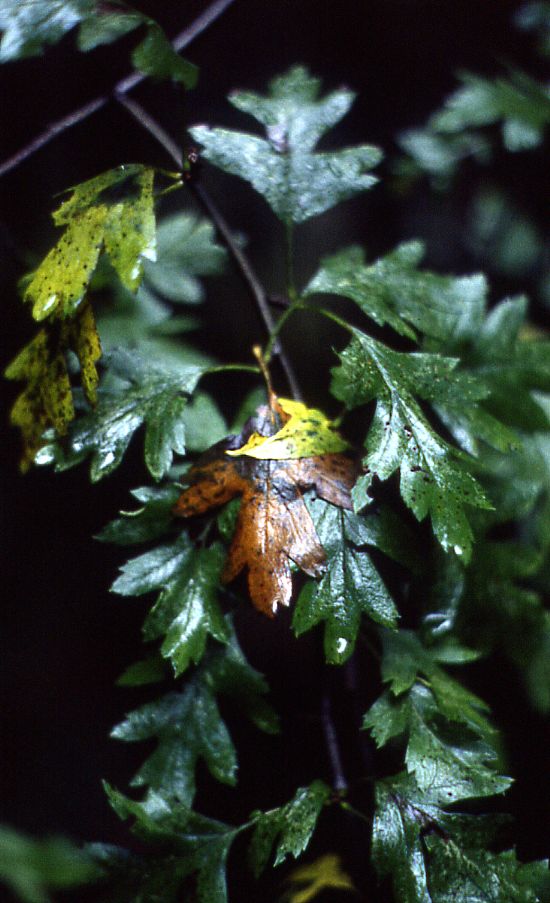 Hawthorn (Huath in old Gaelic, Sgitheach in modern Gaelic) is the 6th letter of the tree alphabet. A small tree with huge folklore significance, it is also known as the May Tree, due to its ravishing white blossom which graces hedgerows and woods in spring.

Hawthorn is the sixth letter in the Gaelic tree alphabet, standing for H as old Gaelic is huath. Modern Gaelic is sgitheach.

Other names for hawthorn: may, whitethorn,  hagthorn, quickthorn, ladies' meat.

Another nickname for hawthorn is the bread and cheese tree, because the leaves are good as a tasty spring snack.

H.E. Bates called hawthorn 'the risen cream of all the milkiness of maytime'.

H is neither a consonant or a vowel in Gaelic but changes the sound of consonants.

Robert Burns loved hawthorn. The Lass of Cessnock Burn was 'spotless like the flow'ring thorn/ with flowers so white and leaves so green.'

Hawthorn can live to 400 years old.

Hawthorn can flower twice a year. Flowers have 5 white petals and 5 pink-tipped stamens.

Bringing hawthorn blossom inside is taboo. This taboo could have good scientific grounds.

Hawthorn blossom is sweet-scented and pollinated by insects. Important for bees.

The scent of flowers includes trimethylamine, also released during sex and by dead bodies.

Hawthorn spines are really stunted shoots. Allowed to grow into a tree it becomes less thorny.

Land rights activists loathe hawthorn as thousands of miles of 'quickset' hedges were planted during the 18th century enclosures.

Hawthorn is sometimes used as root stock for other fruit trees.

Common haws have a single seed. English haws have 2-3. Seed is spread by birds. Thrushes and blackbirds love 'em.

Haws don't ripen fully until the witches have flown over on Hallowe'en. So they should be fine now!

Hawthorn leaves were a tea substitute (or supplement) for people too poor to buy tea.

Hawthorn wood is used for small, lucky knife handles. Its roots were used for combs and delicate ornaments.

Hawthorn wood burns green and makes good charcoal and fuel wood, though it is bad luck to burn it.

Circles of hawthorn were planted as groves for worshipping the earth goddess.

Hawthorn linked to Brigid, earth goddess, who was adopted by church as St Brigid, saint of wells and springs.

Hawthorn exemplifies 'the tussle between pagan nature worship and the strictures of the church'.

Joseph of Arimathea's hawthorn staff took root at Glastonbury and blossoms at Christmas every year.

It was a hawthorn bush that God was supposed to have spoken to Moses through on Mount Horeb.

Jesus' crown of thorns is sometimes claimed to be hawthorn. The tree is thus interpreted as either sacred or blasphemous...

Hawthorn is a symbol of fertility and traditionally used to decorate weddings.

Hymen, Greek goddess of marriage, carried a torch of hawthorn.

Hawthorn-decorated May ceremonies were traditionally scenes of 'lascivious revelry and sexual merriment'.

Chaucer said: 'Mark the fair blooming of the Hawthorn Tree/ who finely clothed in a robe of white/ fills full the wanton eye with May's delight.'

On May morning, gather hawthorn to make garlands to decorate houses and byres for good luck.

The fair maid who the first of May / Goes to the field at break of day /And washes in dew from the hawthorn tree / Will ever after handsome be.

Snap, but don't break off, a twig with the first hawthorn flower to dream of your future husband. Then snap off the twig as a love charm.

Sit under a hawthorn on May morning to be whisked to fairy land.

Thomas the Rhymer was last seen kissing the elf queen under a hawthorn tree, with a cuckoo singing.

King Arthur overpowered the Hawthorn Giant Yspaddaden, so that his daughter Olwen, the hawthorn goddess, could marry Arthur's nephew Culhwych.

Some of the old Irish connotations of hawthorn are: pack of wolves, meet of hounds, difficult night, whitening of face, frightful.

Hawthorn can symbolise satire, or the backlash of a magical spell or wish.
Destroying a hawthorn brings misfortune. If you fell a hawthorn, you'll lose all your cattle, your children or your money.

A poem in tune with the bleaker side of Hawthorn, by Siegfried Sassoon. http://www.poemhunter.com/poem/the-hawthorn-tree/

Hawthorn is the clan badge of the Ogilvies.

Hawthorn was the badge of the house of Tudor, because Henry VII lost his crown and it was found in a thorn bush.

There are loads of good luck hawthorn spells, e.g. plait a crown of thorn and leave it out for the fairies, who will bring blessings.

Bawming the thorn was an old ritual of dressing a hawthorn with ribbons at midsummer, for luck.

Make a globe of hawthorn twigs at New Year to protect your kitchen from bad spirits all year.

The next New Year, burn the old hawthorn globe and scatter the ash on fields/gardens for good growth.

Hawthorn on board ship protects against storms at sea.

Hawthorn wood in rafters protects against ghosts and ghouls.

Advice 3: Beware an oak, it draws the stroke. /Avoid an ash, it courts a flash. /Creep under a thorn, it will save from harm.

The soundest hawthorn weather-related advice of all: Cast ne'er a clout ere May is oot.

And, to finish here's a hawthorn love poem by Willa Cather.

The next tree in the tree alphabet is oak.