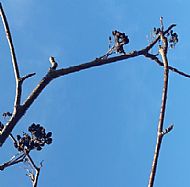 No self-respecting bear would be showing its nose out of its den in weather like this – each day another gale blasts through. The inshore shipping forecast is for the sea state known as ‘high’ – beyond rough, beyond very rough, a high sea is an unthinkably dangerous place to be. And there's more snow due. So, tucked up I shall remain.

Yet, between squalls, there are those moments when the winter world is still glorious, when twigs are silhouetted against a blue sky and a robin sings from a hidden place in the woods. The living sphere is still wonderful.  The winter trees, with their naked, twigs and tightly sealed buds, may seem to be shivering. But under the earth’s surface, their roots are readying the tree for the surge to come.

This week, as January ends and February begins, is one of the traditional Celtic festivals, Imbolc, marking the half-way point between the shortest day of the winter solstice and the equinox. Each day is a little longer: the sun rises further to the east, sets further to the west and, between times, lifts higher above the horizon. Imbolc is a day for honouring Brigid, the Celtic goddess of music, poetry and healing – and, quite frankly, some help with all three would be most welcome!

Right now, around the northern hemisphere, female brown and polar bears are giving birth to their young, snug in their dens. Later in spring, they will emerge, and having ‘died’ at the start of winter, burying themselves underground, they will live again and bring forth another generation. Bears, therefore, are revered around the north as symbols of fertility and regeneration. Many of the ancient Imbolc ceremonies recognise this subterranean miracle: spring is waiting underground, gestating.

So here’s a poem for Imbolc. Stay warm!

In a cave among bouldery scree

the bear is sleeping.

She is dreaming fire

inside a rock hollow

The fuel of the fire is bones.

A pelvis bellows with the burn of sex,

femurs shout out in pain.

A pig's trotter grunts and chars.

and teeth whisper into ashes.

Two spines, one of an otter, one of a fox,

The bear sighs in her sleep

soothed by the heat.

Inside her a foetus grows.

In spring the cub will waken

to buds and blossom.

The earth will be hungry again.

But for now in the dream-flames

Winter chews on its memories

over the twitching nostrils

of the sleeping bear.