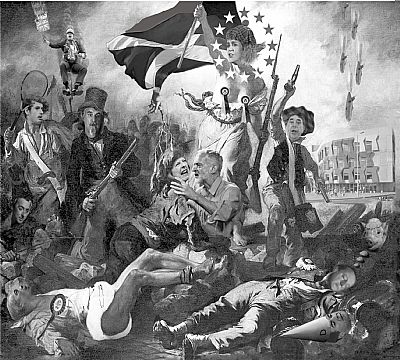 This week I received a new-to-me poetry magazine, The Poets’ Republic, through the post and I’ve been hugely enjoying reading it with my cup of tea in bed these last few mornings. I received it because the guest editor, Helena Nelson of Happenstance, suggested I should submit poems to it, so I did, and one of them, Fences, was accepted.

I’m enjoying it for several reasons. One is that it is irreverent, with hilarious poetry cartoons on the back, and yet it is also doing that serious thing of giving people, poets in this case, a space to express their concerns about the way the world is going. Another is because Helena Nelson has written a typically amusing and yet insightful editorial. A big reason is because it is introducing me to some poets I don’t know, but would like to discover more of, including people like Richie MacAffery, whose poems I have admired for ages now but who I’ve never met. Yet another is because there are some lovely poems in there by poets I do know, such as Brian Johnstone, Elizabeth Rimmer and Magi Gibson. It’s nice to feel I’m in such good company, but it’s also simply interesting to see what they are writing, like hearing their news. I can’t just bump into them in the pub and hear what they are feeling passionate about just now, but a poetry magazine like this one can play an analogous role as a community venue.

Because we are a community, we poets and lovers of poems in Scotland - a supportive community. We like to know what each other are up to. We are a friendly bunch. That’s how it feels.

I often feel I am judged as a writer by how many books I have had published. It has now been 10 years since my last poetry book, other than pamphlets I have produced myself and the anthology, Into the Forest. I have books forthcoming (poetry and novels) but it feels horribly frustrating and disempowering to wait and wait, while the months and years tick by, for my publishers to bring out the books. So meanwhile I have been trying to find other ways for communicating with the people who like my poems.

One was has been to do mini-readings, podcasts of 5 or 6 poems at a time, which you can hear here:http://www.podcasts.com/under-the-influence-c4e545fc6 The most recent is a rather quiet set of winter poems, read at a dark time. To hear back from people who have listened and enjoyed them gives me such a warm glow.

And now, chuckling over Eddie Gibbons’ poetry cartoons and reading my fellow travellers in the Poets Republic, I know myself to be part of a real community, and that sense of camaderie is incredibly valuable. So thank you, poets, poetry listeners and readers and all who value those carefully chosen words. Thank you.