The question of croft houses 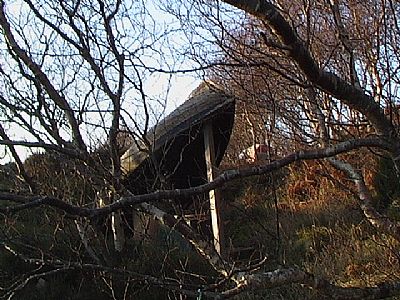 Assynt Foundation is moving ahead with the plan to create new crofts, and it has been great to see how many expressions of interest have been sent in. When I last blogged about this, one of the comments I received was an encouragement to write more about houses on the crofts.

The call for interest that Assynt Foundation published said, ‘At this stage, we cannot guarantee that any of the crofts will have planning permission, services or access for houses.’ How dare we claim, I was asked, that we are going to ‘put lights back on in the glens’ if there is a good chance that the new crofters won’t be able to build houses on their crofts? It’s a good question, and the answer that follows is my own personal opinion, not that of the Foundation.

A croft is, according to the saying, ‘a small piece of land surrounded by a large piece of legislation.’ It’s not a house, or even a house site, although traditionally many people have lived on their crofts and in the past there has been a presumption that a crofter applying to build a dwelling house on their croft would be granted permission.

However these days, there is a local plan that indicates where the Council intends to grant permission for new houses and Assynt Foundation doesn’t own any of that land. In addition, building regulations require access by a fire engine within 50 metres of a new house. The places that will probably be turned into crofts may therefore not automatically be looked on favourably by planners as sites for dwelling houses – they won’t have roads in, or connections to the grid, or be in current housing zones.

I don’t think this matters. There can still be all manner of lights on in the glens as a result of people having land – lamps in polytunnels, solar panels on shed roofs, headlights on vehicles, maybe gas lights in caravans. There will be purposeful activity, even if people aren’t living full time on the land straight away.

I also believe that long-term, the crofts could well become inhabited. The new crofters will be eligible for grants, individually and collectively, to improve their infrastructure, and Assynt Foundation will be a helpful and supportive landlord. Working together, hopefully access, power and other benefits can be developed. Local plans are not set in stone, and once there is evidence of activity, it’s not beyond the bounds of possibility that approval could be gained for sensitively built new dwellings. We just can’t promise this will happen.

I write, of course, as someone who hasn’t lived in a house for nearly twenty years. I think they’re over-rated – sheds, caravans and impermanent, off-grid dwelling places have a lot going for them. Life without central heating and electrical heating appliances feels like more of a liberation than a hardship. Living in a house doesn’t necessarily make it easy to feel like you’re living close to the land.

But I recognise that most people don’t want to go outside on the way to the bathroom, and that it’s normal to want to live in a house. I also know that there is a real issue of lack of affordable housing and a need for affordable house sites in this area.

I just don’t think we need to make guaranteed house sites a prerequisite for new crofts. Granting people permanent tenancies of pieces of land will have huge benefits and is worth doing anyway, even if they can’t build houses on them, yet.

Comment from Rick at 20:27 on 30 September 2016.
Dear Mandy, You live in a very privileged situation. I am doubtful about the health aspects for infants in such conditions, but mostly my colleagues in Delhi, Bangkok and throughout Asia would be quite astonished at the house-croft concept. The majority of the world will have absolutely no idea of what you're talking about and why.
Rick